How does homeopathy work? 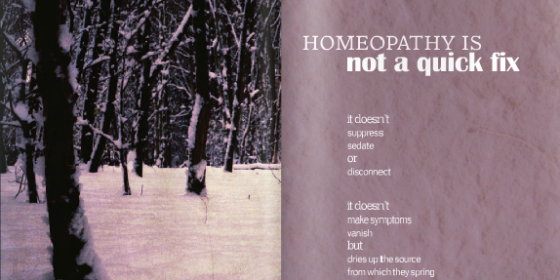 This is probably the most asked question and one that not only homeopaths would like to see answered.

But consider this: we can study homeopathy but it can’t be understood because it is an experience. It shares this quality with other mysteries in life, like love, joy, happiness, health, depression and indeed life itself.
Experiences can be described, shared or expressed but that doesn’t explain anything. It’s like looking at a painting: you can tell what ‘s on it and what emotion it conveys but this is not an explanation. In this sense homeopathy is more art than science.

Science is based on the unquestioned axioma that separate phenomena can be understood by an objective outsider measuring them.

Experience is the awareness of a state of being; when homeopaths names disease a ‘state’, the words turns out to be very well chosen. One can learn and study in order to comprehend something but even when the intellect accepts and grasps the explanation it doesn’t automatically becomes an experience. Were this the case, all guru’s who talk about enlightenment would have enlightened followers, after they listened to the report of his experience.

It astounds me time and again when patients say the medical doctor told them they had a depression. I have a hard time to imagine a depressed person didn’t know he was, until somebody told him. Maybe he didn’t realize his listlessness, despondency and gloominess was a called a depression. Maybe he didn’t know the name of the label, that is possible.
There is one label for 100 different experiences, even Hahnemann already  wrote this down in his Organon, where he said that there is no such thing as ‘the mumps’ or ‘the measles’ but only a case of mumps or measles.

Experiences only become aware -meaning: one realizes he has an experience- when the attention is directed towards it or there is some kind of friction  (or worse) with the outside world. You don’t realize your toe until somebody steps on it. On a psychological level the same applies: you aren’t aware of your fear of height until you have to step into the cable car; you are not aware of your feelings of revenge until somebody cheats on you.
When the outside world doesn’t trigger those feelings, it means they don’t belong to your repertoire. This proves that the signals of the outside world only have effect when there is susceptibility on the side of the receiver.

In homeopathic practise we observe and witness the experience of the patient. Homeopaths are aware of the fact hey have their own experience of themselves and life  (in other words, they have a ‘state’ as well). But they are trained in differentiating between the experiences which are common and in proportion to the outside stress factors and the ones that must have been there all along, as they bear no logical ground. Homeopaths understand the patients as ‘similar-but-not-the-same’ to themselves.  As there are no new feelings, only recycled ones (cfr. Byron Katie), the human condition is made up by the same ingredients… and as all bakers know: endless varieties of cakes !

When we believe in lack, when we identify with our theatre play (which is our character in life), the one who is aware doesn’t feel happy. Homeopathy embarks on the attempt to make their fellow being happier and healthier and -without knowing how it does the trick- witnesses its potential in daily practise. This means we can induce, influence, maybe even manipulate the state of the patient. As ‘that which experiences’, humans are capable to be aware of his experiences; oddly enough all the other phenomena around us apparently not. They are perfect in their ‘tree-ness’ or ‘gemstone-ness’ or ‘cauliflower-ness’.

Why is it we can’t have this experience but rather our version of separateness, insignificance, worthlessness, in short the feeling of being thrown out of paradise. We have our unique blend of these feelings and apparently, when the homeopath was able to spot that recipe, he can give a similar substance with the code of perfection.

Should then everybody stop looking for scientific evidence for homeopathy? Absolutely not.

Science is evolved to the point where the ‘C’ word càn be uttered, where it a few decades ago meant the end of your scientific credibility. Open minds discover ‘inexplicable’ things daily and are even willing to admit. The hubris of the scientific world is diminishing in so much to create willingness to communicate on equal levels. The fact that homeopathic remedies contain ‘something’, be it nanoparticles, information or memory, is established by solid scientific research.

Will science be able to explain homeopathy soon?
I doubt it for the reasons just explained. But I expect science to be able to measure correlations, effects of remedies, all kind of changes in functions (already established in Hahnemann’s time, by the way, that Sulphur given in potency increased the excretion of sulphur in the urine, etc)  and feelings.
In other words: it’ll look from the outside and observe ‘what it does’; which is a completely different thing than explaining what it is or how it works. But give it a second thought: when does science ever really explains something?