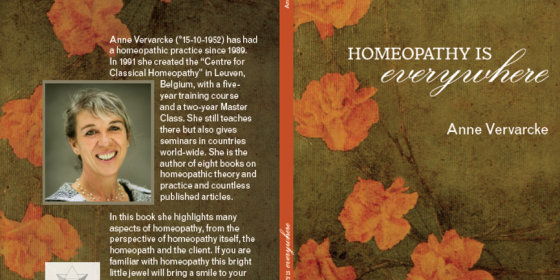 When I wrote “Homeopathy is Everywhere” some 10 years ago, I didn’t fully realize myself how true this is.
The Law of Similars (e.g. like cures like or let likes be cured by likes)  is one of the pillars of homeopathy. Isn’t that a bit of an unusual foundation to build a whole healing system upon? And when this holds true in homeopathy does it in the outside world as well?

What are the other possibilities besides similar phenomena? And how do they influence each other? Imagine waves: opposite waves eliminate each other, equal waves strengthen and increase each other and similar waves resonate and harmonize.

We claim the patients become more coherent when treated with homeopathy. More coherent means the same as more harmonious; when all the parts and aspects of a person are coherent, functions and feelings will work in perfect harmony. In the same way an orchestra sounds harmonious when all the instruments are in tune.

How does similarity brings this about? Are there more examples of similarity in action to be found?

Synonyms of similarity are: analogy, likeness, resemblance, relationship, ‘agreement or correspondence in details’.
Resemblance turns out to be central to human cognition because it provides a basis for the categorization of entities into kinds and for various other cognitive processes like analogical reasoning. Greek philosophers saw analogy as ‘shared abstraction’.
It follows that similarity not only is everywhere but also that it is the foundation of all learning and communication.
We only learn when there is sufficient knowledge present to compare and to add to what is already present on our inner map. This map contains all our thoughts, convictions, beliefs, experiences and representations of ourselves and the outside world alike.
A mental representation is a hypothetical internal cognitive symbol that represents external reality or else a mental process that makes use of such a symbol.
For communication similarity or resemblance is crucial as well. We would not be able to understand each other if we didn’t share enough similarity. Somebody talking in a foreign language can’t convey the message, an exposé on physics doesn’t ring a bell in a 10 year old, an inhabitant of the rain forest might not be able to imagine life in New York.  Similar mental representations, a common language, a similar body of experiences are required to share and understand the message.

This is not a  trivial thing or something only  useful for philosophers.
The capacity to create and understand the meaning of ideas is considered to be an essential feature of human beings.
As I argued in previous articles and books: homeopathy in my view is mainly a symbolic endeavor. This doesn’t make it less scientific or inconsequential: humans spend at least 95 % of their time in symbolizing actions: talking, writing, drawing, dancing, cursing, translating, cheating, praying, telephoning, visiting, celebrating, burying, inventing, laughing, thanking, playing music or theater, creating, studying, paying, , buying, manipulating, exchanging, sacrifying, playing, photographing, counting, comparing, studying, , planning, consulting, believing, cooking, voting,  etc etc.
We couldn’t do any of all these without sufficient similarity or resemblance. That is a simple and at the same time astonishing fact: it is so omnipresent we don’t even realizing it.
Homeopathy seems to be the first (maybe the only) healing system that based its treatment on this universal law.

Similarity comes in degrees
In philosophy it is seen as the relationship between objects that constitutes how much these objects are alike. They can have the same form for instance but different sizes. If they were the same all characteristics must be the same, if they are similar they can have variable differences but must contain enough  likeness in order to consider them similar.
In homeopathic treatment we are looking for the remedy that has the most resemblance to the state of the patient. What does it mean?
Potentized substances proved to be able to produce an altered state in a person, on a physical as well as on a mental/emotional level; this is the empirical foundation of homeopathic remedies. The more similarity between this unique altered state and the equally unique state of the patient, the more effective.

Basically homeopathic treatment is pattern matching.
The homeopath is or should be trained to see the pattern behind the words and stories of the patient. This is done by putting the general features in the foreground and the details in the background. Even when some features are missing, we will fill in the blanks as it is the natural way the mind works.

The human eye tends to perceive similar elements in a design as a complete picture, shape, or group, even if those elements are separated. The brain seems to craft a link between elements of a similar nature. Then, we perceive them in a relationship with each other, separating them from other elements in a design. Human eyes are good at filling in “gaps” or connecting “dots”.
In that sense homeopathy is completely in line with the law of nature and the natural working of the human brain.
Just in case you didn’t know.