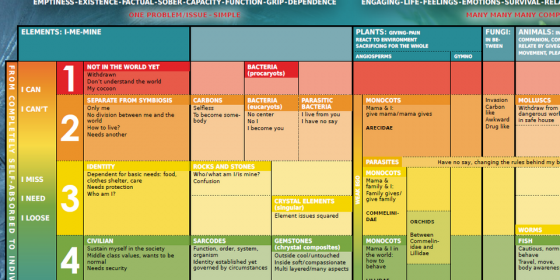 Here it is: an idea of how the Map is conceptualized!

First of all there are two pages of A4 size: the left one contains the groups and families of the Second Dimension (2D) and the right page the Families of the Third DImension (3D).

The characteristics are given in the most reliable, general terms to identify them easily. In 2D the first word is ‘Empiness’ , which is the innermost sensation of all these groups. Remember: when investigating atoms scientists came to the conclusion that they were really delving into empty space….. Most patients are not capable of verbalizing this experience though many actually do and will. And even with the ones who can’t put words on this inner experience, it is helpful when the homeopath understands what the core issue is.
A little side  note: many patients use the word ’emptiness’ in a different context; for instance they will tell they like to do sports or work out because they feel ’empty’ afterwards. Or they have worked so hard they feel ’empty’ in the end. In the first case it is an emptiness of the mind that the patient actually desires and gives him a relaxed feeling. In the second case it is a kind of exhaustion; but both differ from the existential emptiness 2D cases feel and fear.

While 3D families will talk about ‘life’, in 2D it is all about ‘Existing’. What is the difference, you might ask, and how are we going to make the distinction?  One of the differences is that where as 2D people ‘just be’, 3D people are not: they only live in their environment, which talks to them and shapes them. It is as if the world is more or less the background in which 2D people exist while 3D is in constant communication with and part of the surrounding world. Stretching the evidence a bit too far we could say that for 2D people the world is mere the theater, the background against which they exist.
Sometimes they might even talk literally  about ‘my Existence’, or things (cease to ) exist.

This makes 2D cases more factual and sober in comparison with 3D cases. You’ll find yourself asking more questions during the case taking, simply because the patient is waiting for the next one. He’ll answer your question (by no means a 3D does) and wait for what comes next, having the idea he told you everything you want and need to know. Often those patients make you a little uncomfortable because you can get the feeling you have to probe and insist. Sometimes the patients will answer your question ‘can you tell me a bit more?’ with a simple and plain ‘no’….

The issues they do want to discuss with you are of course their physical and mental complaints. Usually you get the information in the beginning in the way the patient supposes is necesary for you know: giving you all the factual data  Afterwards you can start your questioning aiming at understanding what it means for them to have those particular problems. It will invariable mean some kind of loss of capacity. That is why in the colums left to the numbers 1 to 7, you’ll see the words : ‘I can- I can’t, I miss, I need, I loose’. This applies to all Families of 2D. Whether they use the words ‘capacity’ and ‘function’ or not: it’s good to realize this is what it really is about. We shouldn’t be led astray only by the words but pay attention to the contex in which the word is used. A business oriented 3D patient might use these words as they belong to his professional vocabularium but his issues will point to feelings and emotions behind these. And in our world of ‘jobs, jobs, jobs’ some patients might feel it is appropriate to succumb to this narrative.

In Master Classes we often interrupted the intake for analyzing after 15 minutes and decided we have a 2D case because the patient repeated ‘I can’t’ more than once!

Patients will explain how important it is to have support, foundation, something to stand on stable and they worry to ‘lose grip’, if they haven’t done already. We must remember though this is a delusional state and not based on reality. Homeopathy prescribes on ‘as if’ , not on ‘what is’. This means that they can have the idea that they’ve lost ‘it’ while in reality there is no reason for this at all.

The last word you see on the left side under 2D is ‘Dependence’. All 2D groups display a kind of dependency ruling their life, while 3D patients make an independent impression. Of course all humans are dependent in one way or another; we are only human in relationship with others and we’re not meant to spend are life isolated and alone. But the independency of 3D  I’m pointing to refers to their life, their thoughts, their actions, and not their emotions. In contrast with those Families, 2D families are dependent  on the thing they need or lack. According to the horizontal rown this is: somebody, protection, security, admiration or respect.

Want your own map?